The Burn of Shame

I feel the burn of shame even as I write this. 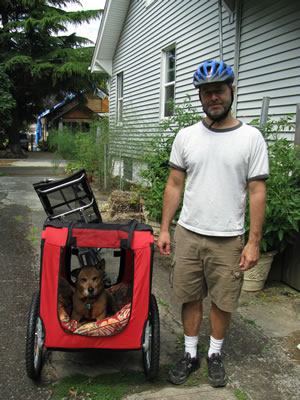 I have a 19 year old dog, Dalai. I love this dog, I mean really love this dog. She's the best dog in the world. Some of you know what I mean; you may also have the best dog in the world. But this best dog in the world is 19. She’s getting dementia, has arthritis and neuropathic pain. It takes her 15 minutes to walk one block. She’s on more drugs than my grandmother was before she died. This dog has two bionic knees from a surgery she had 12 years ago. Her knees are actually good…not like her hips. She’s got cataracts and doesn’t hear well anymore (unless it’s the sound of the treat jar opening in which case she still seems to have supersonic hearing).

I know our time with Dalai is limited. And so, I’ve arranged my work life so that I can take her to work with me most days. She rides in a little covered trailer behind my bike. And she barks the whole way. I’m known by people in the neighborhood as the guy with the barking dog in the trailer. In fact, if she’s not at home, Dalai barks pretty much all the time now when she’s left alone. There’s not much we can do about it. But, because of this, it means I don’t get to leave my office most days when she’s there because she will bark and disturb the others.

One evening, at the end of a long day, I decided I needed a coffee, a quick 10-minute break to run down the street to the coffee shop. I decided to put Dalai in the detached garage of our building, so that in case she barked she wouldn’t bother people in the building. Maybe it wasn’t the best decision, but it was the decision I made. I even put her in her trailer with a nice soft bed. I knew she’d be safe in there and comfortable. Maybe it was a little selfish and a little stupid to leave her alone knowing she’d bark, but it was what I decided.

While I was getting my coffee, a neighbor heard Dalai barking and came over to our building in a rage. She claimed the dog had been locked in the garage all day barking (despite the fact that Dalai had been in the garage for less than 10 minutes) and she threatened to call the police and the press. Several of our staff witnessed the whole thing. The yelling, the claiming I’d abandoned our beloved dog all day to a dark garage. It sounds a little silly now, but it was really painful. It hurt. I mean really hurt.

Shame can be like that. It’s like a burn. Like a slow burn in the chest. Like it’s burning a hole in your soul or something. For me at least, that burn of shame has gotta be one of the most painful feelings in the world. And it burns hottest when it involves something that you really care about. I really care about that dog and I knew in some way that for a few moments I put myself ahead of Dalai. I did leave her alone. I did know she would be a little uncomfortable.

I wish I could tell some uplifting end to this story. There is none. I went over and talked to the neighbor, tried to apologize, to clarify what had happened—that Dalai had actually only been in there for a few minutes, that she’s demented and will bark whenever she is not directly with us, that I just wanted a tiny break. It didn’t matter. She just kept yelling.

After I left, I kept thinking about how shitty people can be sometimes. Anger soon joined my shame, anger at this woman who didn’t know me. Then I got into a sort of battle with myself, my anger and my shame duking it out. “Who is she to judge me?!?” “How could you be so selfish to leave your old dog in a garage?!?”. “Look at all the money and time and care we’ve poured into this dog. Some people would say it’s ridiculous how much of your life has revolved around this dog!”. But still, it wasn’t enough. My mind wouldn’t let me off the hook. At least not for several hours.

It’s not like I think about this incident much. I don’t. But it’s amazing how long-lasting memories of shame can be. How they can burrow into you and keep their power. This is one of those. I just need think about it and the burn is back. For many people, this burn of shame and judgment is an almost constant presence in their lives. Their minds never find a way to let them off the hook. And I notice my mind wanting to judge me as I write this. For being whiny about my little shame incident. “Others have it much worse,” it says. However, this is balanced against the fact that I experienced so much shame about this seemingly trivial incident because I care so much about my dog. The one thing that helps is knowing that if Dalai could understand somehow, in her demented little doggie-brain, she wouldn’t want me to judge myself. She’s my little Buddha-dog.

So, with Dalai having forgiven me, I’m going to work to forgive myself. When I think about this incident, I’ll try to let myself off the hook. And go spend some quality time with Dalai.