Extending compassion to others is undoubtedly important. Especially since America is, arguably, more divided now than ever.

But being able to receive compassion is important, too. In fact, research suggests that it may be a crucial factor in promoting wellbeing.

If we’re unkind to others, we’ll likely receive some immediate feedback – perhaps a disappointed look, scolding, or ostracization. But what is the consequence of avoiding the kindness of others? 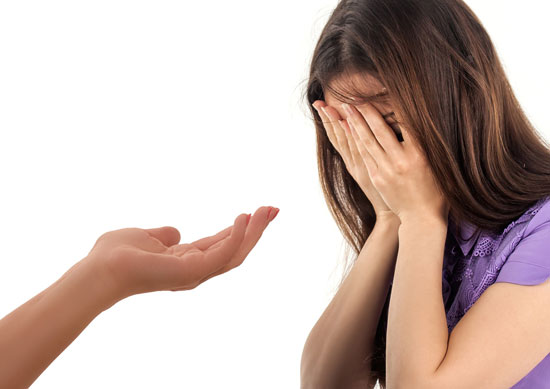 Many studies have shown that harsh self-criticism contributes to depression. In one study, a group of researchers asked people of various ages (college students and adults), from a variety of countries (Canada, England, and Portugal), to report their levels of self-criticism and the degree to which they feared receiving compassion from others (e.g. “Feelings of kindness from others are somehow frightening”).

This research fits with other work that indicates that the quality of our relationships and our sense of belonging is key in moderating the effects of self-criticism on our mental health. We don’t necessarily need to change our self-critical thoughts to have a good life. But, if our self-criticism leads us to isolate ourselves from others, or interferes with our ability to receive care from others, then depression could follow.

We are a hyper-social species, and have evolved to live in relationships with others. Just like the polar bear, who we see struggling as the ice flows, we humans struggle to thrive, or even survive, when we become separated from our the social habitat in which we evolved to inhabit. Because of our social nature, the biggest harms from self-criticism come when it leads us into separation and disconnection from others. Indeed, interpersonal variables are some of the biggest predictors of depression. We need good relationships to thrive and being open to compassion and love from others is key. Those who are blocked in receiving these experiences tend to suffer terribly. Thus, a key route to addressing the difficulties (like depression) associated with self-criticism is not through getting rid of self-critical thoughts, but through helping people relate more effectively to others.

These data suggest that when working with self-critical individuals who are struggling with depression, a main target needs to not only be intrapersonal (e.g. decreasing self criticism and increasing self compassion) but also interpersonal (e.g. increasing their access to and ability to take in compassion from others). These kind and compassionate relationships with others are our version of the ice float, and, without it, we are lost.