Unfortunately there often seems to be a wide chasm between what happens in the research lab and what happens on the front lines of clinical work. On the one hand, researchers need to listen to clinicians and learn about their direct experiences with clients. On the other hand, clinicians can benefit from hearing about clinically relevant research. We hope these “research roundups” provide useful summaries of recent research that can improve your practice with highly shame prone and self-critical clients.

In this post, we highlight some important findings at the intersections of physiology, biology and psychology that have actual real-world implications for your clinical work. So, today, what happens in (research laboratories studying the) Vagus, will not stay in Vagus. ;-)

However, before ‘pumping’ through the summaries, we'll briefly describe a few important terms so you don’t ‘skip a beat.’

Heart Rate Variability: What it is, and why psychologists care about it

Activity in our autonomic nervous system, a system responsible for the regulation of unconscious bodily functions (e.g. breathing, digestion, and heartbeat), reflects fluctuations of our internal states. As a result of the operation of our autonomic nervous system, there is typically a slight speeding up of the heart on every in-breath and a slight slowing down of the heart on every out-breath. The change in the heart rate from in-breath to out-breath is known as heart rate variability (HRV) and provides an index of autonomic nervous system function. Researchers often assess HRV by measuring High-Frequency Heart Rate Variability (HR-HRV; see below for more info), or respiratory sinus arrhythmia (RSA; see below) These measures provide an approximation of activity in the parasympathetic nervous system (the branch of the autonomic nervous system involved in relaxation and energy conservation). Certain situations (e.g. cognitively engaging tasks) involve decreases in HRV, whereas other situations (e.g. relaxation) involve increases in HRV. Vagal flexibility refers to the degree to which HRV changes according to situational demands. Some researchers hypothesize that vagal flexibility is associated with psychological wellbeing (e.g. see Bazhenova and colleagues).

Giving Comes from the Heart

Although researchers have previously found that altruistic feelings are associated with increases in vagal activity, this is the first study to explore whether altruism is related to the ability to intentionally increase your heart rate variability. In this study, 240 physically healthy adults (ages 20 - 55) completed behavioral tasks that measure prosociality, as well as a biofeedback task. In the biofeedback task, participants observed a red ball on a screen, and were instructed that its position represented an aspect of their mental-bodily state. Participants were unaware that the mental-bodily state represented was the power of their heart’s high frequency oscillations, a measure closely related to HR-HRV. Then, researchers simply asked participants to make the ball move upwards without moving their body. The researchers found that participants’ ability to move the ball upwards (i.e. voluntarily increase their HR-HRV) was related to prosociality motivated by altruism, but was unrelated to prosociality motivated by social norms or strategy. In summary, people’s ability to regulate their HRV is related to individual differences in altruistic giving.

Take-aways: Teaching clients strategies that can increase their sense of social safety and thereby increase their heart-rate variability may help facilitate more altruistic prosocial behaviors. For example, relaxation techniques or lovingkindness meditation have been shown to increase HRV and may offer benefits not just to the client directly, but through improving their relationships because people tend to like people who are altruistic and prosocial.

To Strengthen your Heart, Warm It 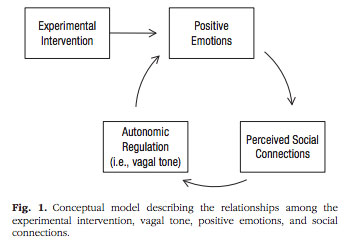 Take-away: Teaching clients loving-kindness meditation (LKM) can increase their experience of positive emotions, which can also improve their perception of their relationships and improve vagal tone over time (a strong index of cardiac health). For more information about how to use LKM with highly self-critical clients, see our posts here and here.